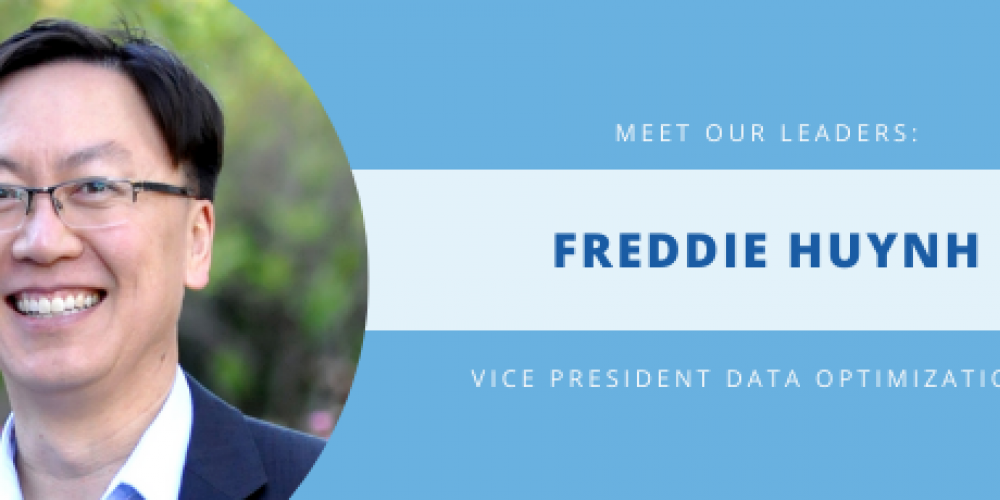 As part of our continuing blog and video series “Meet Our Leaders”, we sat down with our VP of Data Optimization for Freedom Debt Relief, Freddie Huynh. Freddie has had a long career in the financial sector, starting with his B.A. in Math from Claremont McKenna College, and an M.S. in Operations Research from Stanford. Freddie spent more than 18 years at FICO, overseeing the development of FICO® Scores 8 and 9.

Here we ask Freddie questions about his career, how he came to Freedom Financial Network, and a few things he wishes more people knew about money and finance.

Freedom Financial Network: Freddie, tell us about your career before Freedom.

Freddie Huynh: I didn’t have too many stops. I was at FICO from 1996 to 2014, which in this day and age, is an eternity to be at one company. I was there for such a long time for two reasons. The first was that the people were amazing. My team was an extension of my family, and we had a really strong culture. We all felt that we were part of something big, and that it was important to do something right, so we banded together around that.

The second reason is that I had a unique responsibility. Someone got the crazy idea to put me in charge of the company’s flagship product, the FICO® score. What I always tell people is, “If you told me in grad school that I would be in charge of a product which basically impacts almost all U.S. adult consumers, I would tell [you] no one in their right mind would ever even think of doing something like that.”

But the reality is that a lot of people put their trust in me, and it was an incredibly humbling and daunting experience, but certainly was one that I was incredibly grateful for.

Toward the latter part of my career at FICO, as much as I loved it, I felt it was time for me to leave, for two reasons. The first reason was I wasn’t getting any younger, and the second was whether I like it or not, there’s more to the world than FICO® scores.

I left FICO and joined a boutique analytics consulting firm in Palo Alto. I was employee #37 there. My goal was to expose myself to different technologies, to different industries, and to different problems, and to try to learn as much as I could.

FFN: That is a big change after 18 ½ years. What inspired you to join Freedom Financial Network and how did you get here?

FH: The Reader’s Digest answer was Andrew Housser. He was ultimately the person who inspired me to join. As you know, he’s one of the co-founders, and the co-CEO.

Here’s some of the longer story. Back in the mid-2000’s, there were some bad actors in the debt settlement industry who would collect fees from consumers without delivering the promised service. It was a terrible outcome for consumers, and it reflected poorly on Freedom Debt Relief — who did not operate in this manner.

Andrew saw this as a leadership opportunity, and working with Freedom’s General Counsel through the Federal Trade Commission, they were able to get regulations put in place prohibiting debt settlement companies from collecting fees until the debt was settled, and the consumer agreed to the settlement.

To me, this demonstrated Andrew’s commitment to consumers and how he thought about Freedom’s role as a business. That left a real impression on me and influenced my decision.

FFN: Freddie, describe yourself in one word.

But I am honest, and I think this is really important for what I do for a couple of reasons. First, when you work in the financial services industry, there is no greater currency than trust because when consumers reach out to you for a service or for help, having them trusting you is critical. The second reason is that I’m a problem solver by trade. If you’re a really good problem solver, you have to be intellectually honest. If I am unable to assess what I am doing objectively and honestly, I am not putting myself, and I am not putting my team, in a position to succeed.

The third reason is that for better or for worse, I am a leader at Freedom. In my former life, I was always taught to lead by example. I believe that if you hire right and if you treat people right, they’re going to run through walls for you. Part of treating people right is being honest with them.

If you hire right, you’re going to get people who are bright and talented, and who have a strong moral compass. If you’re dishonest with them, they’ll see right through it. You’re going to lose your ability to lead.

FFN: January is a time of year when people try to get their house in order. What advice do you have for getting your finances in order for 2021?

FH: I would recommend everyone take an honest assessment of where they currently are and where they want to go. The first part is hard, because no one wants to understand all the ins and outs of their current situation.

If you honestly assess your current situation, you would put yourself in a better place to solve your individual problem. You would know, how much am I making? How much am I spending? Is that positive or negative? And if it’s negative, what can I do to change it? Really have a heart-to-heart conversation with yourself to understand where you truly are.

FFN: The year 2020 has been so rough for so many Americans. Do you think the financial advice that you would give in any other year would be different that you’d give in 2021?

FH: No. I think the advice would stick. It certainly doesn’t diminish what’s going on right now. I think that there is a lot of hardship and stress out there. If there’s more employment instability, there’s more income instability, it creates severe challenges for people. But at the end of the day – the first thing you do before you solve a problem is take an inventory of where you are.

Then, once you have an idea of the lay of the land, then you can start to figure out, these are the levers I can pull; this is how I can start to think about things. Even though we’re kind of wrapping up an unprecedented year, I would still say that my advice would be the same, whether it be 2021, or 2019.

FFN: What is the one thing that you’ve learned about managing money, debt, or spending, that you wish more people understood?

FH: For me, I would say, don’t underestimate the impact of small, positive steps. Earlier, we were talking about problem-solving. I think about it this way: When faced with a really big problem, you can feel overwhelmed, and don’t know where to start.

One of the things that I’ve learned over the years, is to tackle big problems by chunking it up into smaller problems, which are easier to solve. You’re not going to solve a big problem all at once.

So, there’s a theme of being able to focus on the little things and on the things you can control. It’s important to understand that even in difficult times, you do have more control than you believe. This isn’t meant to say that there are no challenges out there. But if you focus on what you can control, you’ll be surprised how that can build to something bigger.

Don’t dismiss these small things as being inconsequential. It may seem that way, but these things do add up over time. I firmly believe that’s how you move forward to a destination. You take one step; then you take the next step, and you keep doing that. You realize, “My gosh, I’ve walked a few miles.”

Learn more about our leadership and values at Freedom Financial

At Freedom, we feel fortunate to have leaders like Freddie Huynh who bring the kind of integrity that allows us to help our consumers in the best way possible. If you’d like to learn more about our leaders, how we work, or managing your personal finances and debt, please visit our blogs for more news and information.

Below, you can watch the video version of our interview with Freddie Huynh. [embedded content]

Editor’s Note: This blog post is not a transcript of the video interview and has been edited for length, clarity, and to provide the best experience for our readers.