Public Service Loan Forgiveness: Who’s Paying for It? And Is There a Cap? 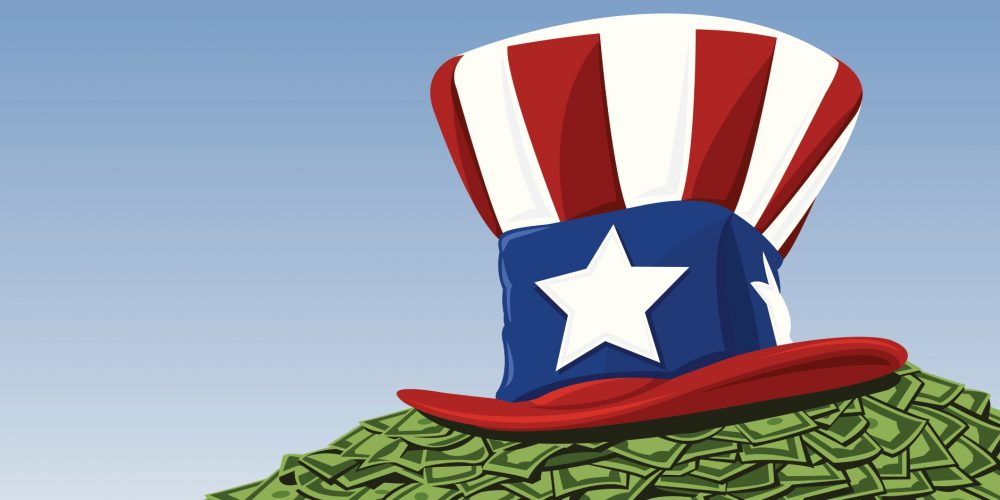 Exactly how much PSLF forgives depends on how much each borrower owes at the end of their decade of service. But while some people think this program is a no-brainer, others are wary of its potential cost for taxpayers.

According to the Congressional Budget Office, the program could cost nearly $24 billion over the next decade. To get a grasp of what this program does and what’s its implications are, let’s address the following questions:

What is the Public Service Loan Forgiveness program?

Congress created the Public Service Loan Forgiveness program in 2007, and President Barack Obama’s administration expanded it in 2012. Its purpose is to offer low-paid public service workers some relief from their student loan debt.

Borrowers first sign up for an income-driven repayment (IDR) plan, which limits their monthly payments to a percentage of their income.

Then, after borrowers make payments for 10 years (while working at a qualifying workplace), their remaining federal student loans are forgiven.

Why does PSLF cost so much?

Public Service Loan Forgiveness sounds like a fabulous (and well-deserved) option for our public servants. So what’s the problem?

It could cost much more than originally anticipated. Here are two reasons why.

The eligibility requirements for PSLF are purposely broad.

You can enroll in the program if you work for a government or nonprofit organization — which means an estimated 15% of the population (nearly 24 million people) could be eligible, according to the Brookings Institution. Of course, that number becomes smaller when filtering for people who owe student loans.

As of right now, there’s no Public Service Loan Forgiveness cap. In other words, there’s no limit to the amount of loans that can be forgiven. So people can rack up six figures of undergraduate and graduate student loans — and then have them forgiven.

Case in point: An estimated 30% of PSLF-eligible borrowers have more than $100,000 of loans, according to the Brookings Institution.

What are the arguments against PSLF?

Jason Delisle is a resident fellow at conservative think tank American Enterprise Institute and an advocate for changes to the PSLF program.

In the above Brookings report, he argued that the program is being abused as a subsidy for graduate students. Using our Public Service Loan Forgiveness calculator, you can consider what he means.

Here’s what would happen under PSLF if you were on income-based repayment and had:

As you can see, the program sometimes makes the borrowed amount irrelevant — because the rest will be forgiven anyway.

Delisle offered an example of a man who accumulated $28,000 of loans as an undergraduate. He continued on to a master’s in social work and then a job in public service.

Assuming he earned the average income for a social worker (remember: his payments would be based on income), he’d pay off only $28,000 of his loans over 10 years. That means his entire graduate education would’ve cost him nothing.

“Thanks to PSLF, a student like the hypothetical one above who is faced with the choice of borrowing $10,000 to live frugally while enrolled in graduate school or $20,000 to support a more comfortable lifestyle is probably more inclined to choose the latter,” Delisle wrote.

In Delisle’s eyes, PSLF is too generous and — because income-driven repayment plans forgive loans after 20 or 25 years — redundant.

What are the arguments in favor of PSLF?

On the other side of the fence are progressives and public servants.

“The stakes are high for students, particularly those who may face financial stress when they graduate,” wrote Mark Zuckerman, president of the Century Foundation. Because of rising student loan defaults and delinquencies, he said PSLF is “critical.”

He also argued that it benefits our country as a whole.

“For new graduates carrying student loan debt, the promise [of] loan forgiveness and flexible repayment options can be an important factor in taking and staying in … important public interest jobs,” he wrote.

He wrote a response to Delisle’s piece in The Huffington Post and argued that only a small percentage of people who are eligible for PSLF actually have student loans and will stay in public service jobs for 10 years.

Bower called Delisle’s article “misleading” and said PSLF is an “affordable and critical investment that directly benefits all our communities.”

What is the administration’s perspective on PSLF?

While the previous administration proposed eliminating the PSLF program completely, Pres. Joe Biden has suggested plans to reform it.

During his bid for presidency, Biden said he supported a Public Service Loan Forgiveness cap of $50,000, with annual payouts of $10,000.

Instead of waiting for 10 years to receive full loan forgiveness, eligible borrowers could get partial loan cancellation each year.

But this forgiveness would be capped at five years, meaning borrowers with debt loads higher than $50,000 would still owe money after this time.

Biden has not made any changes to the PSLF program, but it’s worth keeping an eye out for future policy reform.

Is PSLF a good idea?

What do you think? Is PSLF worth it?

Regardless of whether you support the program, you always can advocate for yourself.

If you haven’t yet enrolled in school, think carefully before taking on student debt. If you’re already struggling with loans, educate yourself by reading through our blog and learning about programs like IDR and PSLF.

And if you have strong feelings about student loan forgiveness programs, contact your representatives to make your voice heard.

Rebecca Safier contributed to this report.